Text to Donate CCROCKLAND to 21000
You are here: Home / Stories of Hope / Jovin’s Story 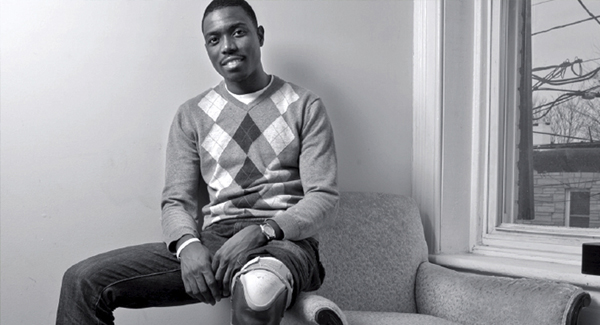 Jovins is a 25-year-old Haitian police officer who had tragically lost his leg due to injuries sustained in the January 2010 earthquake in Haiti. His home was completely destroyed, and through the Ramapo Task force and nurses from Rockland’s Good Samaritan Hospital working in Haiti at the time, he was brought to the United States for further medical care and rehabilitation.

Within a short time, Jovins met with an Immigration Counselor assigned from the Archdiocese of New York’s Catholic Charities. After the initial consultation, it was decided his compelling and humanitarian story warranted continued action. Through the services of Catholic Charities, a lawyer was assigned to Jovins, who successfully obtained the legal documents needed to stay in Rockland.

Currently, Jovins is a student at Rockland Community College, studying engineering, as his dream is to return to Haiti to help rebuild his country. In the meantime, we are working with him to obtain his working papers, which will enable him to become more independent.Fortunately, Jovins found a suitable living arrangement with a kind and generous retired professor, and, private donations have helped him cover living expenses. With the help of Sr. Fran at Good Samaritan Hospital, we were able to help find him employment at the hospital.

Jovins is most grateful to Catholic Charities Community Services of Rockland for helping to rebuild his life. And we too, are grateful for the opportunity to give him the gift of HOPE.