Text to Donate CCROCKLAND to 21000
You are here: Home / Highlights / Timothy Cardinal Dolan Blesses the Soil and the New Greenhouse at Catholic Charities of Rockland

Timothy Cardinal Dolan, Archbishop of New York, Was on Hand to Bless the Soil and the New Greenhouse at Catholic Charities
Community Services of Rockland – the Site of the Only ‘Farm to Food Pantry’ Greenhouse in the Northeast

His Eminence Timothy Cardinal Dolan, the Archbishop of New York, was the guest of honor at the recent Catholic Charities Community Services of Rockland annual Blessing of the Soil family event on April 28th.

When the Cardinal arrived, he spent thirty minutes greeting those in attendance and getting a tour of the Inspiration and Meditation Garden, the murals that were painted by students over the years, the food pantry, the outdoor vegetable garden, and the new greenhouse located on the land adjacent to the Catholic Charities Community Services of Rockland building. The Cardinal spoke to attendees pointing out the significance of the project and its positive impact on those in need. 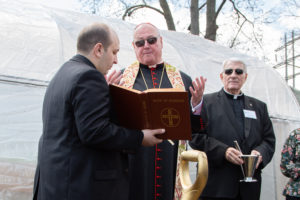 “This day was the culmination of a dream that started several years ago when we had the idea that the people who use our food pantry should be eating healthier and that the land that we own should be used in a more productive way. The vegetable garden was the first logical step and last year we had the idea to add a greenhouse, so we could grow fresh produce all year long. Having Cardinal Dolan here to bless the soil and the new greenhouse was an honor that none of us will forget,” stated Martha Robles, Director of Catholic Charities Community Services of Rockland. 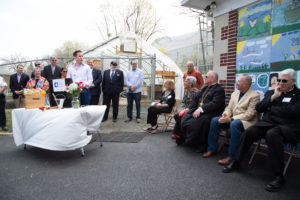 artha Robles had the initial vision and secured a grant through NYS Assemblyman Kenneth Zebrowski. She then brought together a team to install the greenhouse and managed to get nearly everything else donated. “One of our missions is to raise awareness about hunger and food insecurity in Rockland and bring fresh produce to our participants. The goal is to use the garden and the greenhouse to not only provide fresh produce all year long, but to offer educational opportunities to teach children and adults about farming, the value of growing and eating fresh vegetables, and the positive environmental impact of growing your own food,” stated Robles. Catholic Charities Community Services of Rockland often hosts demonstrations to show participants how to cook the various vegetables harvested from the garden. It is a successful prototype of a ‘Farm to Food Pantry’ model.

“I was pleased to be able to secure state funding for this groundbreaking and innovative greenhouse project. The new greenhouse will transform Catholic Charities from a traditional food pantry to a self-sustaining farming initiative that will feed residents throughout the county. This sustainable approach will both promote healthy living and fight hunger insecurity in Rockland,” said Assemblyman Zebrowski.