The Rockland County Bar Association selected Martha Robles, Director of Catholic Charities Community Services of Rockland, to receive the annual Liberty Bell Award. Through this award, Martha Robles is recognized for her outstanding service in promoting a better understanding and respect for the Constitution, the Bill of Rights, and our institutions of government. The Award is always presented on Law Day which is May 1st, 2017. 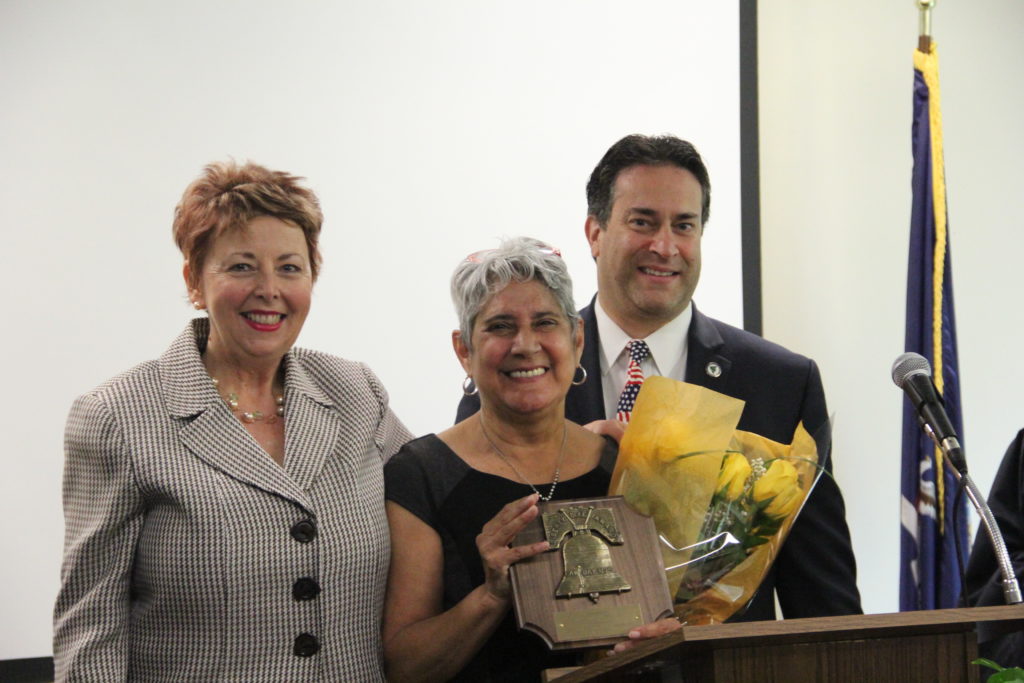 The theme of the 2017 Law Day is the 14th Amendment: Transforming American Democracy. The theme provides the opportunity to explore the many ways that the Fourteenth Amendment has reshaped American law and society. Through its Citizenship, Due Process and Equal Protection clauses, this transformative amendment advanced the rights of all Americans. It also played a pivotal role in extending the reach of the Bill of Rights to the states. Ratified during Reconstruction a century and a half ago, the Fourteenth Amendment serves as the cornerstone of landmark civil rights legislation, the foundation for numerous federal court decisions protecting fundamental rights, and a source of inspiration for all those who advocate for equal justice under law.

“Ms. Robles’ commitment to social justice and equality is what has truly distinguished her.  Her work at Catholic Charities since 2006, and her advocacy for those persons who are unable to speak for themselves are her hallmarks.  Ms. Robles is also an active member of the Rockland Immigration Coalition, Continuum of Care, the Haverstraw/Suffern Collaborative and the Rockland Rent Guidelines Board.  Ms. Robles has worked with many of the agencies throughout Rockland to help resolve crisis whether its preventing eviction, making sure food is on the table or advocating for a fair and just society,” stated Robert B. Marcus, President, Rockland County Bar Association.

Martha Robles is the Executive Director for Catholic Charities Community Services (CCCSR), located in Haverstraw, New York. Born in the Bronx of immigrant parents, the third of six children. Martha received her Masters in Public Administration from NYU and has spent over 30 years developing and organizing programs that focus on health and human services.

In 2006 Martha Robles began her work at Catholic Charities Community Services, a not-for-profit social service agency, established in 1996 by the eighteen parishes in Rockland. It has a long-standing history of providing the basic necessities of life, such as food, shelter and emergency assistance for those in need. Through compassionate and professional case management, Catholic Charities Community Services of Rockland, assists individuals and families of all ages, from every race, ethnic background, Catholic and non-Catholic alike. Through the leadership of Martha Robles, the agency has flourished as she has ensured the efficient, economical, and effective utilization of resources to meet the needs of those serviced.

Her office is a welcoming place for all who enter, bringing hope to families and individuals who are experiencing a crisis, eviction, or who are in need of food assistance.

Martha’s voice can be heard at many meetings in Rockland County, speaking forcefully about issues of social justice and equality. Martha is an active member of the Rockland Immigration Coalition, Continuum of Care, Haverstraw/Suffern Collaborative, Rockland Rent Guidelines. Because of CCCSR affiliation with Catholic Charities Archdiocese of New York she has been able to provide legal immigration services; including advocacy and speaking on behalf of those persons who are unable to speak for themselves. Martha has worked with many of the agencies throughout Rockland to help resolve crisis whether it’s preventing an eviction, making sure food is on the table or advocating for a fair and just society; her voice is strong as she speaks for the voiceless. Her heart is full of compassion.